We met on the dam of the reservoir at 8 am and scanned the open water and the shores for any birds. The light was poor but thankfully it wasn’t too breezy and definitely more sheltered than it would have been on the coast. An elegant grey heron was roosting on one of the floating reed beds and the various mallards and escaped farmyard ducks occasionally interrupted the peace with their loud quacking. A Sparrowhawk flew past and we all agreed that it looked small, so was probably a male.

As we set off on our walk around the Millennium pathway, a movement caught Jean’s eye and we quickly located the bird – a Grey wagtail, which was searching for insects in amongst the rocks in the water where a pipe empties into the reservoir. This species is almost always found by fresh water.

A small party of Goldcrests attracted our attention with their insistent, high pitched calls and we had to peer upwards to catch a quick glimpse as they flitted about in the tree tops. Thankfully we came across another later in the walk and were able to look down on it in the tree below us.

Unfortunately the hoped for migrants did not appear, but we were pleased with a Short-toed treecreeper, ( a sometimes hard to find resident species) feeding on a moss covered tree, along with Great and Blue tits, and we all tried to identify the few calls we did hear.

Finally we scanned a flock of gulls resting on the water, commenting on the difference in size between the Great Black Backed gulls, which are the largest gull species in the world and the still sizeable Herring gulls around them.

We gathered near the kiosk at Pleinmont at 8 am and enjoyed great views of common buzzards and raven as we waited for everyone to arrive. As it wasn’t too windy and knowing that there were interesting birds up the top, we abandoned the idea of walking along to Pézeries and headed up the Valniquets, where we enjoyed clear but fleeting views of a couple of firecrests.

In the fields towards Mont Herault we spent some time locating 5 golden plover, which were remarkably tolerant of disturbance by us, dog walkers, cyclists and clay pigeon shooters- not all birds are so relaxed!

An adjacent field was a hive of activity with a flock of 20+ yellow wagtails on the ground and an equal number of green finches in the hedges, while the odd robin, stonechat and wheatear added to the mix.

We turned back and walked across the top and down the wooded path of the Vaux de Monel, picking up a couple of common whitethroat on the way.

Finally we spotted a whimbrel on the rocks offshore- it’s ‘humbug’ striped head more easily visible through the telescope.

In all we saw at least 35 species, with good views of most.

Thanks Ann for your invaluable input – glad you were there.

I was joined by 6 birders this morning.

Didn’t expect a Press reporter and photographer to turn up though!

Walking through the narrow lanes around Kings Mills we encountered several sizeable flocks of chaffinches that were searching the stubble fields and hedgerows for food. We checked the individual birds as best we could, as they dashed from open ground to the shelter of the trees and back again. We were hoping that there might be a Brambling with them, but on this occasion we drew a blank.

Adding to the feeling that we were definitely into ‘winter ‘ birding were the numbers of song thrushes and blackbirds around and a lone fieldfare, which put in a brief appearance.

We saw a buzzard and a sparrow hawk and from the hides at the Rue des Bergers reserve, we saw a great spotted woodpecker and heard a Cetti’s warbler singing.

The pond itself was fairly quiet, with only one teal present.

We found what was possibly a family of white wagtails, and a couple of pied wagtails and some meadow pipits around a herd of cows, while near the stream that runs under the Rue des Bergers, we saw a grey wagtail.

These were just the highlights, of a very interesting couple of hours.

A small group of us enjoyed a highly productive 2 hour stroll through the lanes from Bordeaux to Les Miellettes and back. At least 40 species of birds were seen well, and this total could easily have been higher as no birds of prey were seen on the walk.

The main theme of the morning were the sheer number of birds that were in the island to overwinter or to feed before moving on to other areas.

We started off by enjoying the sight of a 20 strong flock of Brent geese in Bordeaux harbour. These had travelled from their breeding grounds in Siberia to spend the winter in our much milder climate.

In among the boulders at the top of the beach was a female Black redstart, another bird that had travelled a long way to our shores, this time from Central Europe.

Further along the beach we came across a flock of Turnstones a small Wader that makes a huge migration from its Arctic breeding grounds to its wintering grounds in Europe and further south.

In the fields bordering the nearby lanes, we came upon flocks of Redwing and Fieldfare, these are members of the thrush family and come from Northern Europe to feed in milder areas, on berries and worms. They are on the move all winter, searching for food and sheltered areas throughout Western Europe. They were accompanied by flocks of Starlings, which come to our island from Eastern Europe.

Another northern species that we were delighted to see were the 2 male Brambling that were feeding with a flock of Chaffinches in a field off the Miellette lane. Nearby, 2 female bullfinches were spotted quietly feeding on blackberries in a small quarry. This species, in contrast to most of the others we saw, is highly sedentary and would most likely spend there whole lives in Guernsey.

It was a fascinating morning and we all felt that the birds were enjoying the calm mild weather, after the recent storms. 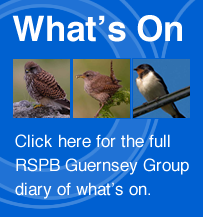